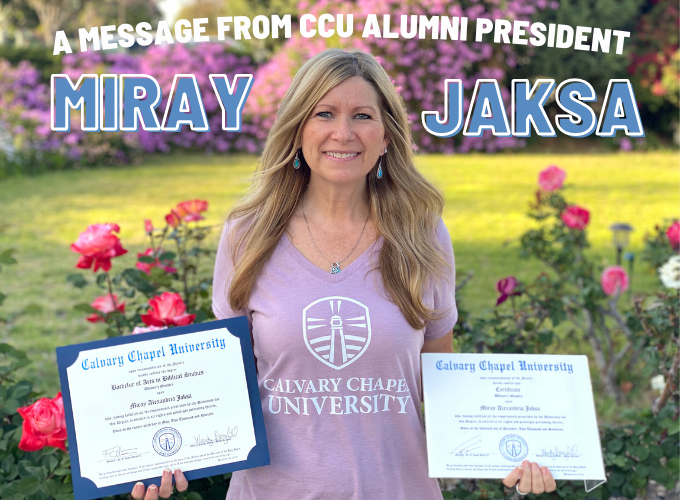 Where are they now?

After graduating CCU in 2019 I had come to know many amazing women and men who were serving the Lord. I had the privilege of being in course with like-minded people who inspired and impacted my life, who were set on serving the Lord and had committed to being equipped for ministry. As I have been blessed to get to know more graduates in the last few months it is evident that The Lord is working through each of the 153 CCU Alums in various callings and ministries around the world. What was on my heart for this Alumni site was to highlight what God is doing among the Alumni at CCU- the various ministries that are out there, the years of experience that some of you have, the wealth of wisdom that is there from failures & success, the resources that are out there for those new to ministry and to have a central place where iron can sharpen iron, where someone’s vision for ministry might inspire someone else to step out in faith, where each of you can be an encouragement to a fellow brother or sister. We would love to hear what the Lord is doing in your life since you graduated at CCU and how God is using you to reach those within your sphere of influence. Each one of you have been called to serve the Lord with the gifts He has given you for the equipping of the saints and the furtherance of His Kingdom. It is our desire to have a place where we can glean from each other while we serve the Lord and reach the lost. In these last days we desire by God’s Grace and with His Spirit to make those spiritual investments in the lives of others. Where has God called you to make an impact for His Kingdom? Perhaps there a specific ministry that you are passionate about which could inspire someone to pick up the baton and step out in faith. This devotion from CCU Alumni & CC Pastor Jim Gallagher really spoke to me about how we can serve the Lord together. 1 Chronicles 18:1 “After this it came to pass that David attacked the Philistines, subdued them, and took Gath and its towns from the hand of the Philistines.”“I think it is worth noting that while we read, “David attacked, David defeated or David subdued”, scripture makes it clear, he did none of these things on his own. His exploits were accompanied by both the presence of the Lord and a host of faithful men. As the chapter concludes, we read of Joab, Jehoshaphat, Zadok, Abimelech, Shavsha, Benaiah and David’s sons, all of whom served alongside the king, making this success possible. David started out as a Lone Ranger, stepping into the valley of Elah when no one else would, but as time went on, a host of others teamed with him to accomplish the work of God. This is a vivid picture of how the church works today. When ministry takes place, it usually begins in the heart of one man or woman. As he or she seeks the Lord, the calling becomes clear and they step out in faith to see what God may accomplish. As time goes on, the Lord will raise up others around him or her to assist in the work, because the work of God requires a host of different giftings and abilities. The leader must learn to give ministry away to those who choose to serve if the work is going to grow and the purposes of God completed. Not all of us are called to be David and venture into uncharted territory, some are called to be a Joab or a Zadok, who comes alongside to assist in the work of God. The key lesson is, whatever God has called us to, we want to go after with all our heart, soul, mind and strength.” Pastor Jim Gallagher | CC Vero Beach, FL | CCU Alumni – Miray Jaksa CCU Alumni President